Full end-to-end post production on this 6-part series for BBC1.

As Ordinary Lies follows the lives and lies of the main characters it was felt that a "cool but colourful" look was needed for the main locations. This was done by Senior Colourist Jamie Parry by drawing out the steely blue tones available. The car lot comes with its own accent colours from all the motors! When the action goes to hotter and more dangerous places, from rainy Warrington to the glare of the Dominican Republic, the grade was ramped up to accentuate the difference between those locations and the comparative safety of home.

Shot by Sean Van Hales on the Arri Amira camera in Log-C ProRes, ample range was captured to allow the grade to encompass and enhance all those story requirements. The series was edited by Paulo Pandolpho (Banana and Cucumber) and Jake Bernard (Call The Midwife, Jonathan Creek and Wild At Heart).

Ordinary Lies gave dock10’s Head of Audio Mark Briscoe the opportunity to work first hand with writer Danny Brocklehurst. What they aimed to achieve was a fresh and contemporary mix.

They were keen to run a degree of continuity through the series, although the base is the same each episode has a unique tale. 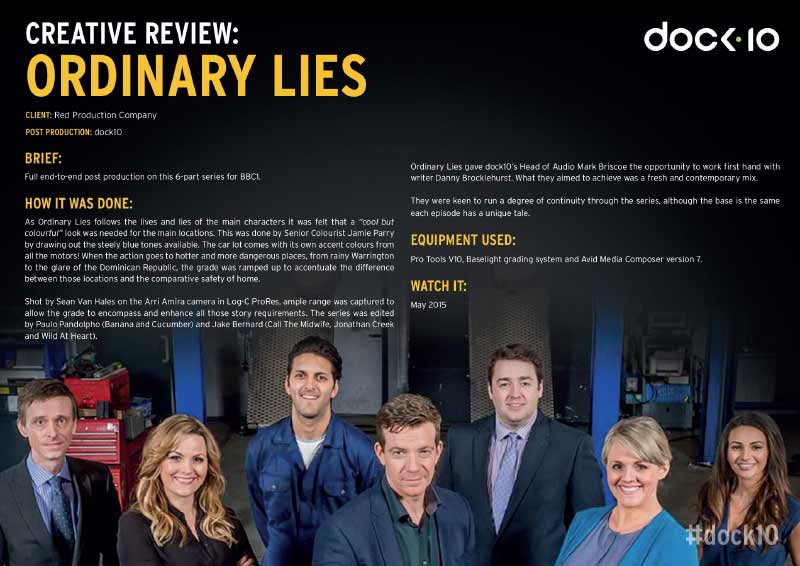