Jamie says: "Paranoid is a police drama with a story based on psychology, drugs and multicultural exchanges. The overall aesthetic was to be that a lovely pastoral England had something evil happen in it, whilst across the water in Germany, cultural expectations should be played with. In order to achieve these points, the colour, wherever possible in England, was pushed towards a golden glow with blue skies and then a steely futuristic colour scheme was applied to the main shoot locations in Germany. The main German police lady however is a warm, funny mother of 3 boys, and great pains were taken so that her house reflected that very surprising, and lovely character twist - making her house glow and radiate warmth.

Night time grades were pushed towards sodium in England and a lovely teal colour for Germany, whilst interview rooms were given a rich cyan colour to make the characters stand out from the walls. Aerial shots were shot on the DJI phantom drone at 4K and were slightly softened to match the main shoot, which was Alexa at 2K Log-C. VFX were delivered 2K Log-C and were occasionally enhanced in the grade, with glows placed on fire and areas windowed and highlighted to attract the eye to detail. ITV did not want anything crazy done in the grade but the creative team felt that using the subtle enhancements listed above moved it into less standard territory whilst still being enjoyable to everyone."

Mark says: "When working on Paranoid I tried to give the mix an edgy industrial feel. To do this I liaised closely with both the composer and sound designer so that the two elements complimented each other. This worked really well with the style in which it was filmed. The director was also given drafts of the rough mix to make sure that we were in the right ball park before it got to the final mix stage." 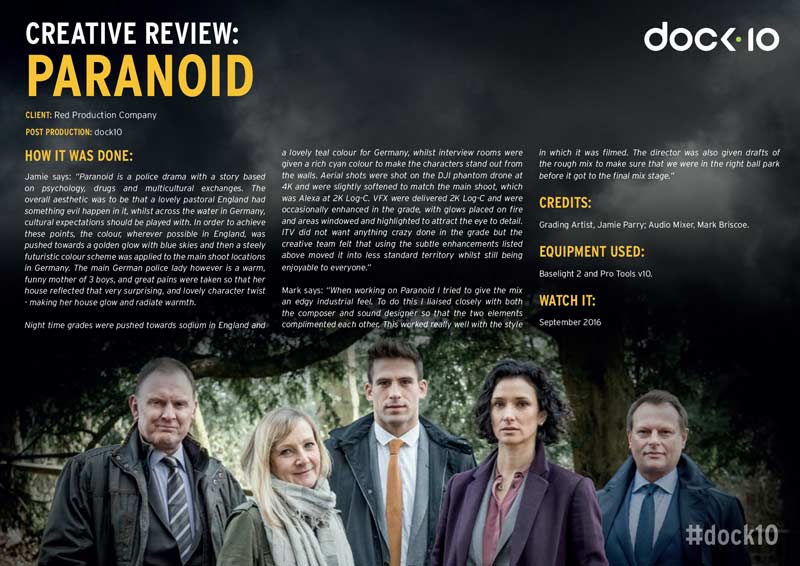