Manage the final finishing post production for the multi-award winning twelve-part children’s drama series Wolfblood for CBBC. The fourth series moves to a new city location as Jana develops her new pack and the secret comes under increased pressure.

Shot on location in and around Newcastle on the Arri Alexa, the offline edit took place on-site, rushes were transcoded in Avid to DNX36 utilising camera LUTs to produce a working grade for assemble edits. Raw rushes were delivered to dock10’s facility at Media City once each block had completed filming where a Nearline & LTO backup of all rushes was created. Once edits were locked, final sequences were delivered to dock10 and conformed back on a dedicated Avid station at DNxHD365 providing 10-bit 4:4:4 material ready for grade.

dock10 used Media Shuttle to deliver/receive material and managed the liaison directly with Jellyfish Pictures in London for all VFX work before incorporating these back into the conformed edits.

dock10’s Baselight 2 grading system was then used for the grade where colourist Jamie Parry helped create a new feel, not seen in previous series, to compliment the change of location and introduction of new characters, to embed the VFX of the wolves into the cityscape. With the new, more urban setting of this series of Wolfblood, a more heightened, less muted feel was felt appropriate in the grade. Neon and streetlights were accentuated to give a vibrant city feel to the new episodes.

Integration of the "wolf form" VFX was key, and so mattes supplied by the VFX vendor jellyfish, were used to bring out just the right amount of wolf in the darkness! Primarily done on set with contact lenses, the eyes of the characters, expressing their inner wolf had to be brought out occasionally to maximise impact, as the eyes were occasionally more muted than desired, due to conditions on set. This was achieved by selective shape tracking and careful keying of the characters eyes.

Wolfblood visions and senses were also heightened in the grade, using colour, defocus and even layering of elements such as smoke and lens flare - all possible using the Baselight platform, to creatively enhance the impact of the story telling. Award winning dubbing mixer Mark Briscoe worked on Pro Tools to create a bright audio mix with hidden layers to perfectly compliment the storyline for the audience. With Wolfblood, a huge amount of sound design was in place to create wolves that the audience can believe. We went to huge lengths to personalise each wolf giving them an age and a gender, so the audience could still recognise who was who. In this series we see the pack has moved from the forest to an urban city-scape, so our aim was to reflect this in the soundscape. 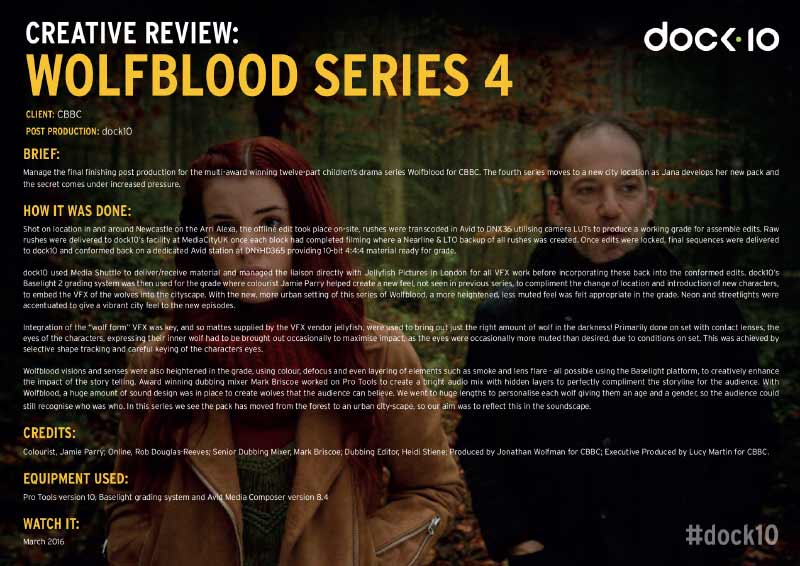