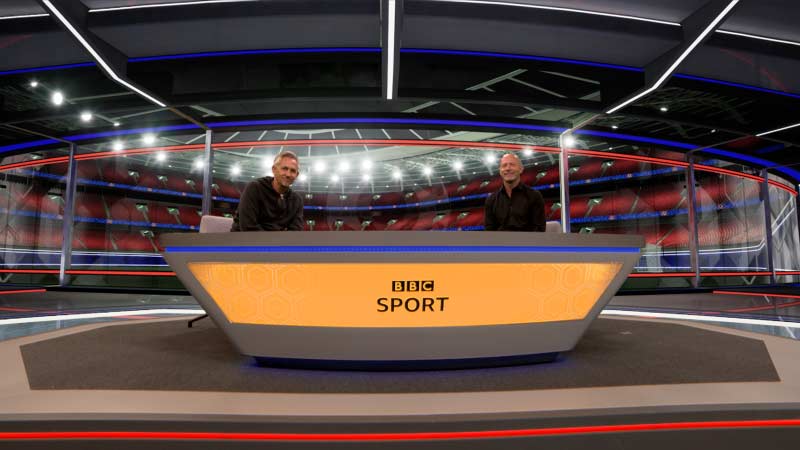 Now in its 55th year, Match of the Day returns to BBC One and BBC iPlayer on Saturday, August 10, to provide audiences with all of the highs and lows of the 2019-20 Premier League season. The most popular football programme on television reaches 7m viewers each weekend and Gary Lineker and the MOTD team will be on hand once again to provide expert insight and analysis on one of the most entertaining leagues in world football.

Taking over the reins from Des Lynam back in 1999, Gary Lineker enters his 20th season as presenter of Match of the Day. One the UK’s leading sports broadcasters, Gary has led on the BBC’s coverage of numerous World Cup, European Championship and FA Cup tournaments and famously presented the opening show of the 2016-17 season in his underwear after tweeting he would do so if Leicester City won the league the previous season.

Alongside Gary on the first show on August 10 are MOTD favourites Alan Shearer and Ian Wright. Shearer still sits at the top of the Premier League goal scorer charts on 260 and won the league with Blackburn Rovers in 1995. Wright won the league and FA Cup twice with Arsenal.

Joining the BBC Football team this season will be four new and very familiar faces; Peter Crouch, Micah Richards, Tim Cahill and Karen Carney. Former England and Manchester City defender Micah Richards won the Premier League and FA Cup during his career at City. Former Premier League and England striker Peter Crouch played over 40 times for the Three Lions and scored over 140 league goals in his career. Australia’s all-time record goal scorer, Tim Cahill, has earned over 100 caps for his country and is well known to audiences from his time at Everton and Millwall. Karen Carney is the second most capped England player of all time and has played for Arsenal, Chelsea and Birmingham where she was the first woman to be inducted into their Hall of Fame.

Match of the Day, Match of the Day 2, Football Focus and Final Score return to BBC One from Saturday, 10 August, with a brand new look for the new season. All will come from a fully 360 degree virtual studio using the latest in real-time computer game rendering technology at dock10. All programmes will be based within a ‘BBC Sport football stadium’ and this stadium will be used to create fly through augmented reality graphics such as team formations and data-driven analysis graphics.

Dan Walker, Mark Chapman and Jason Mohammad and Gabby Logan will all be back for the new season and leading on the main talking points in football.

Over 35m tuned into BBC Football programmes during the 2018-19 season with a further 50m programme requests to watch on BBC iPlayer and BBC Sport website - 62 percent of those who watch Premier League action only watch through the BBC. This season MOTD will be available to watch earlier on BBC iPlayer from 7pm on Sundays and MOTD2 from midnight also on Sunday.

Starting in September, MOTDx is a brand new magazine programme focusing on the lifestyle and culture of the Premier League. Chelcee Grimes, Craig Mitch, Reece Parkinson and Liv Cooke will join regular host Jermaine Jenas and will dive into the world of music, fashion, culture and football events.

Following on from the record-breaking audiences that tuned into the Women’s World Cup this summer, the BBC will continue to show a game every weekend of the Women’s Super League on BBC iPlayer and BBC Sport website starting with Chelsea v Tottenham Hotspur at Stamford Bridge on Sunday, 8 September (12.30pm). Also on the BBC, the Women’s Football Show returns showcasing the best of the action from the WSL, plus the Women’s FA Cup including both semi-finals and final live, and Lionesses games as they build towards the Olympics and Euro 2021 plus other home nations internationals.

The BBC will once again be the home of the men’s FA Cup from the qualifying rounds right through to the final starting with Punjab United v Broadbridge Heath on August 10. BBC iPlayer and BBC Sport website will show six qualifying games before the First Round proper starts on Saturday, November 9. Over 27m tuned into the BBC‘s FA Cup coverage last year and there will be 15 live free-to-air FA Cup matches during the 2019-20 tournament on TV plus highlights of every round as the world’s most famous domestic Cup competition builds towards the final on Saturday, May 23 at Wembley Stadium.

20 Years of Queer as Folk