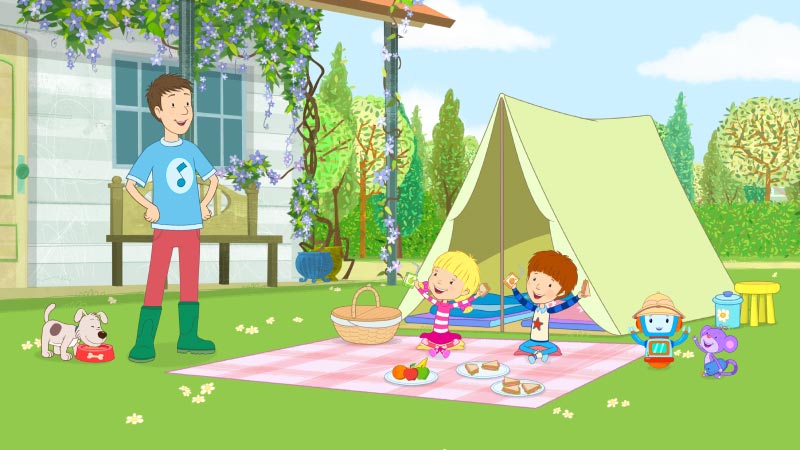 Daisy & Ollie is an exciting new pre-school series from CHF Entertainment, that encourages young children to be curious and question the world around them. To drive the show’s narrative and enhance its atmosphere, dock10’s Senior Dubbing Mixer, Paul Harrison, has crafted a carefully understated soundtrack that helps to turn everyday learning into a great adventure.

"The average four-year old asks over 400 questions a day," says Helen Brown from CHF Entertainment. "These range from the sublime to the ridiculous, from the serious to the silly, and everything in between. Daisy & Ollie, along with their out of the ordinary toys, Boo the Monkey and Whizzy the Robot, discover the answers to their questions! Along with having educational value, the show is also tremendously fun and engaging thanks to the talented team that has worked so hard to bring the concept to life."

Knowing that the soundtrack would be paramount in driving the narrative and direction of the 52x7 minute episodes, CHF Entertainment turned to Paul Harrison from dock10 for the audio post production. As one of the industry’s most experienced animation audio professionals, with over thirty years’ experience and many iconic shows to his credit, Paul worked closely with the production team, including the celebrated composer Keith Hopwood.

"The way that sound brings life to pictures is fascinating," says Paul, "and it’s always exciting to be brought in at the early stages of a new programme. It gives you a great opportunity to really understand how the show works and to make the soundscape an integral part of its development path. Whilst we’ve deliberately kept the Daisy & Ollie soundtrack reasonably understated, it effortlessly carries the story along and really enhances the messaging that lies at the heart of each episode."