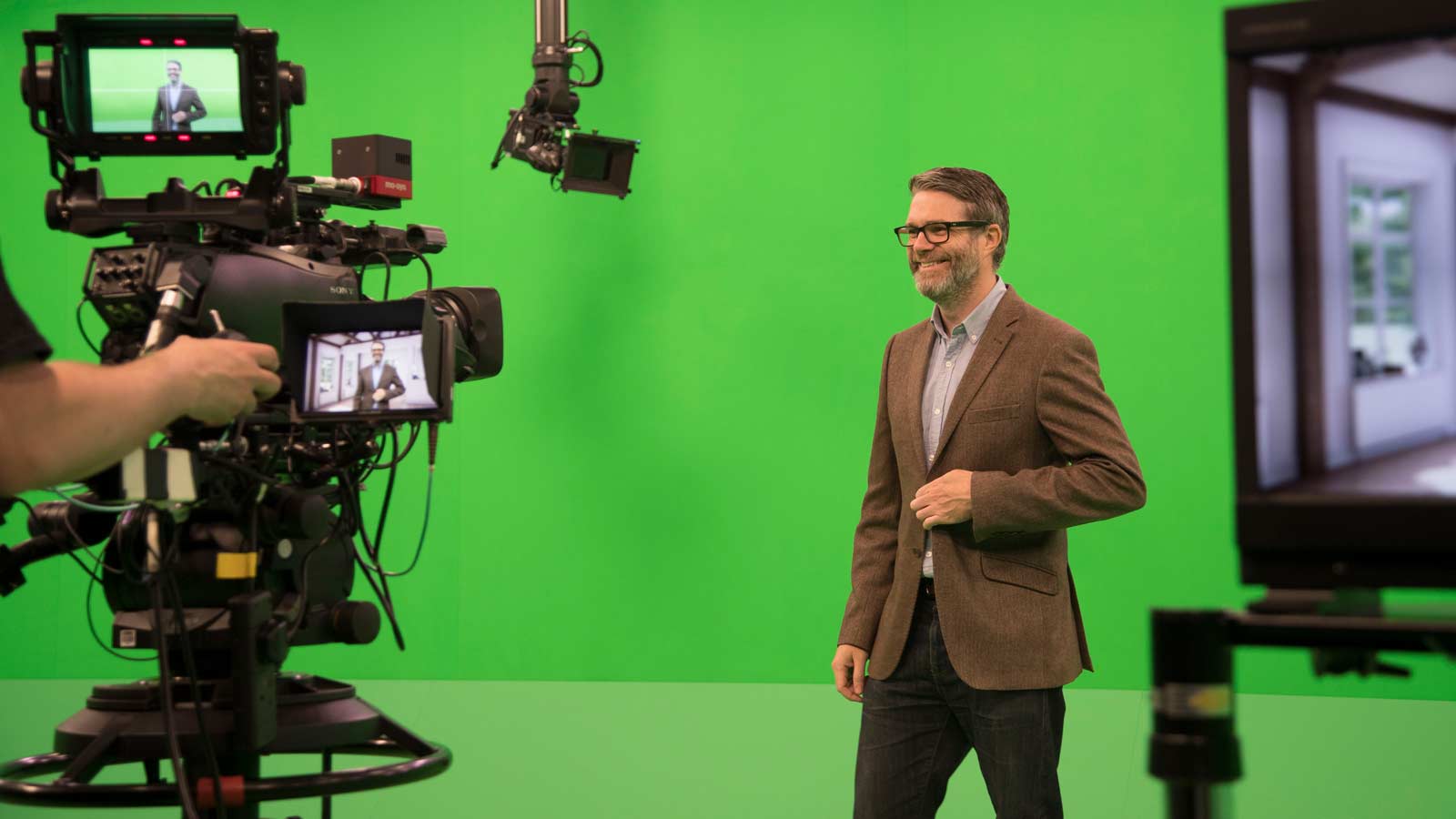 Advances in real-time rendering and camera-tracking technologies are starting a revolution in Virtual Studio production. Creative directors can now take control of mixed environments where a virtual world is combined with real sets and augmented reality - live and with photorealistic results. This amazingly powerful next generation technology is changing the way we make television, films, live events and creative content for the corporate and creative markets.

Richard Wormwell, Head of Production Innovation, explains how dock10 is making the most of this new technology for customers.

Q: How many virtual studios does dock10 have?

Typically, when people think of a virtual studio they think of a room with green walls and a green floor. The presenter stands in the middle and the green around them is replaced on screen with a new background. This allows you to put presenters into environments that would not be possible or practical to build as a physical set – a tropical rainforest for example. However, these traditional virtual studios bear no comparison to the modern technology we are using at dock10 – it's like comparing SD to UHD/HDR. At dock10 we have taken a radically different approach and instead of building a single virtual studio which can be restrictive in size and space, we have given all of our studios a virtual capability. All the technology is centralised in our CTA and can be deployed to any or all of our ten studios at any time so that creative directors can choose the size of studio that best fits their requirements. It's a really revolutionary approach and we have been taking calls from facilities all around the world asking us how we do it!

We announced our new UHD-ready virtual studio offering back in May 2019. Basic green screen technology and even virtual studios have been around a long time, but what excited us was the possibilities coming out of gaming technology. We saw the potential to take green screen to the next level by using the real-time photorealistic graphic rendering which makes the virtual environment look so much like the real world that you can't distinguish between what is physical and what is virtual. The movie industry and some TV dramas have been doing this for years, but they put the actor into a green screen for the impossible shot and then add the virtual world in post. Now, thanks to advanced camera tracking and graphic processing, we can do the whole shot in real-time, live on screen, so the director will see what the viewers will see! These advances are truly breathtaking and will change the way we make television forever - we absolutely wanted to be in it from the start.

Q: How are dock10's virtual studios being used?

This last year has seen an explosion of demand for our virtual studio capability. Broadcasters like the BBC were already early adopters, using our virtual studios for sports shows like Match of the Day, Match of the Day 2, Football Focus and Final Score. Our virtual capability has allowed them to create different virtual sets for each brand in a way that would have been impractical with a traditional set. When the schools closed at the start of the lockdown last March, we created the virtual classroom for BBC Bitesize Daily in record time. And with many live events cancelled during the pandemic, we were delighted to host the Broadcast Tech Innovation Awards from a virtual studio, enabling the event to be broadcast to the audience in their homes. Another project saw us build a virtual stadium for an interview with Liverpool and England star Trent Alexander-Arnold.

In the esports industry we are part of Weavr, the groundbreaking technology platform revolutionising the way fans experience sport by creating a mixed-reality environment. We have also been experimenting with some fantastic augmented reality characters for children's television using motion capture. However, some of our biggest projects have to remain a secret. Lockdown made it almost impossible for global brands to make television commercials, broadcast live events and create product content in a conventional way. But our virtual capability has enabled some brands to make some amazing content, giving creative directors a real competitive advantage that they are understandably keen to keep a secret.

Q: How long do virtual sets take to build?

A set can take anything from a couple of weeks to a couple of months to create. We use industry-standard processes and graphics generation so we can import from almost any standard 3D package and this allows detailed elements to be added very quickly. However, the system can build a virtual world as complicated as you can imagine so some projects may involve months of design and planning to perfect. The skillsets required for our virtual studio are entirely new to television, so we are having to recruit people with experience of VFX in movies and the games world.

Q: How easy is it to adapt a traditional set?

It's really easy to adapt our studios - that is the advantage of the system we have created. Whichever studio you are in and whatever television set you can think of, we can either build it entirely with graphics or we can take a current set and add virtual or augmented reality elements. So, imagine taking a singing competition in our 12,550 sq ft flagship studio, HQ1, and then expanding the physical set with a wide shot that transforms it into a concert venue or something even more spectacular! And you don’t even need a green screen to do it – that level of flexibility and creative freedom is the beauty of our virtual studio capability.

Q: What are the challenges for presenters and crew?

Like any new technology, some people love it and adapt to it easily while others need more time. But virtual studios are here to stay, and we are training as many people as we can to give them experience and skills for the future.

Q: What is the future for virtual studios at dock10

We have all seen new tech come and go, look at 3D and 360. All that promise and fanfare was killed by the extra kit required at home and a disappointing viewer experience – it died before it really got started. This is different. Unlike 3D and 360, you don't need a new TV, special glasses or a headset, and millions of people are already watching shows broadcast live like this every week. Virtual Studios technology is staying with us and not in the way people might think. It's not about building a green box and fake sets, the winners will be the creative directors who use the mixed reality of an actual set in a virtual world where the viewer can't see the difference between what is real and what is not. I really believe that the next big global format to take the entertainment world by storm will be using this technology to bring to life an idea we were told was impossible or too expensive. I am waiting for the call and I'm very excited about it.